Voting Libertarian for CA Lieutenant Governor is a Signal Vote 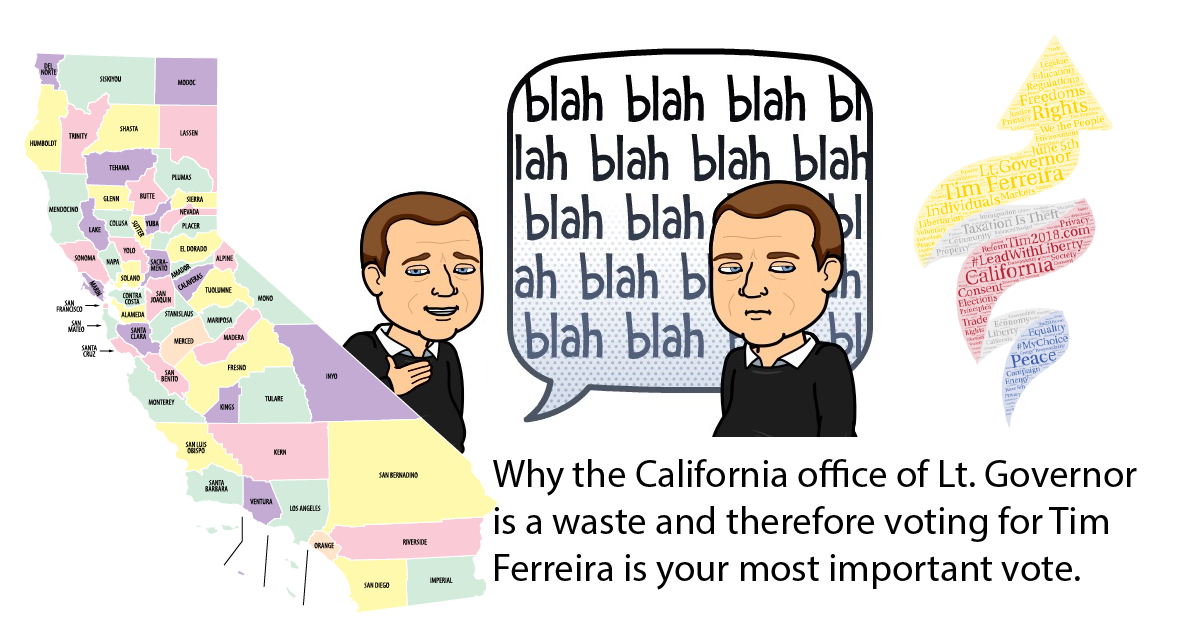 In true politician style - I'm going to talk out of both sides of my mouth in this post. My goal: convince you that the office of Lt. Governor doesn't matter; therefore, it can be the most important vote you will make. Below you will find my argument against the position of Lt. Governor. If you agree with part, most, or all of my argument, then take advantage of this government oversight by voting Libertarian.

Some people feel that voting for a Libertarian is throwing away their vote. They feel it is unlikely a Libertarian will win and it could cause a less desirable candidate to win. We have a growing populace not represented by their preferred candidate. We must address this problem, but that is not the point of this post. This post is about making your vote count on June 5th.

Voting for a Libertarian in the Lt. Governor race is the most important vote you will make on June 5th. It is like what you learned in math class: a negative multiplied by a negative becomes a positive. "Throwing away" your "throw away" vote becomes a powerful signal vote. It signals that you want something more than politics as usual.

Now let me describe why the office of Lt. Governor is not necessary. I will start with a quote from the current Lt. Governor himself. When asked how often he goes into his Lt. Governor office in Sacramento, Gavin Newsom said, "Like one day a week, tops. There's no reason.… It's just so dull." This isn't the only time he has made light of the insignificance of the job.

The California Libertarian Party's platform also snubs the job. "We call for the abolition of the State Constitutional Office of Lieutenant Governor, which has no real purpose."

The most common argument for having a Lt. Governor is to "train" the next Governor. This is a farce. The duties of Governor and Lt. Governor are vastly different. Election results tend to agree with this. The last time California elected a former Lt. Governor as Governor was Gray Davis in the late 90s... and then California recalled him.

Before that, in the 50s California elected Goodwin Knight, but he was Acting Governor at the time of the election. He assumed the position after Warren resigned to become Chief Justice of the US. Frank Merriam in the early 30s also assumed the office of Governor from Roth before his election. C. C. Young in the 20s is the most recent Lt. Governor elected to Governor without later recall. That was 100 years ago.

If Gavin Newsom wins the election, it will not be due to his tenure as Lt. Governor. It will be in spite of it. When mentioning Gavin Newsom, people remember his actions as mayor of San Francisco. They are hard-pressed to recall anything he has done in the last 8 years as Lt. Governor.

Another common argument for having a Lt. Governor is because there is too much for the Governor to do alone. California is too big to have a single executive officer. After all, we recently reclaimed our spot as the 5th largest economy in the world (passing the UK). This argument fails to recognize that California has 12 constitutional offices: Governor, Lieutenant Governor, Secretary of State, Attorney General, State Controller, State Treasurer, Superintendent of Public Instruction, Insurance Commissioner, and the 4 members of the Board of Equalization.

I contend that the other 11 offices would be able to assume the duties of Lt. Governor. If that is not true, we still don't need to keep all 12 positions. Instead, remove obligations of the state until 11 or less positions would suffice. I prefer less. Let's challenge ourselves and see how lean we can get. Many states don't have a Lt. Governor. Some states which have a Lt. Governor actually have what we call a Secretary of State. These states label the position Lt. Governor only because it is second in line of succession. I would argue we should do the same. Assign the duties and title of Lt. Governor to the office of Secretary of State. Eliminate 1 of the 12 constitutional offices.

But I digress. My point is, the current office of Lt. Governor is redundant, ceremonial, and not needed. Therefore, a vote for anyone other than a 3rd party candidate means nothing. The only way to make your vote for Lt. Governor mean something is to vote for a Libertarian.

I haven't even shared the best part. The election on June 5th is a primary. The results of the election decide which top two candidates show up on the November ballot. After you send a signal with your Libertarian vote in June, you can still pick your poison of choice in November.

The two major parties only pay attention when a third-party candidate gets more than 5% of the vote. In order for this to become reality, you have to actually vote. Preferably, you will also tell friends, family, and coworkers to do the same. Share this post. Talk about it. Pledge your vote. Donate money to the campaign so we can share the message far and wide. Let's send a united signal this election cycle.